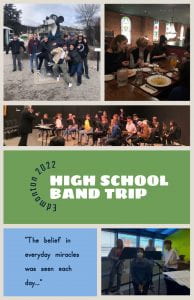 For the past three years our concert band has watched in silent wonder if there would ever be another band tour. The thought of when was always present, but the thought of wonder was almost lost. It is this thought of wonder of possibility thinking that I’m writing to you today. The idea that sometimes, just believing in an idea that is greater than yourself is just enough to create a positive change.

It all started in the fall of 2019, when young eager minds began dreaming of a band tour that would take them to Seattle Washington for the spring of 2020. They would work hard for the next two years fundraising for this event. People from all over the city would invest their time, an

d money in fundraising and campaigning for a high school tour. As Covid became more evident in the lives of our community so did the understanding that there would be no tour. And so, it began the journey of wonder. Would there ever be another tour for the students that had worked so hard in their efforts for this dream.

To understand the loss that our class has experienced in the past few years, you must first understand what they have gone through. For the past two years our bands have worked hard learning new music for music festivals that continued to be cancelled. They have had fundraising campaigns for tours that did not happen and had cancelled venues like the Evening of the Arts that celebrated their hard work. As a school we have lamented the absence of these community concerts and the joy that each event brought to our school. To call our program “The Performing Arts”, and yet not perform has been heart breaking for both the students as well as myself.

So, this year when we started planning for our tour, most students didn’t believe that it was going to take place. But God had a plan for this class, and on this journey, He would lead us to trust and be obedient on Him alone.

Proverbs 3:6  “Trust in the Lord with all your heart and lean not on your own understanding. In all your ways acknowledge Him, and He will direct thy paths.”

The morning that we were to leave students arrived eager to load the buses and get going. Our first day of travelling was quite jovial with roads clear of snow and little traffic along the way. Our morning devotions were focused on making space for God. So, we did, we prayed, and we thank God for allowing the tour to take place. Yet we had no idea the space that God was calling us to have for Him.

The second day of travelling we set off for Edmonton Alberta. The air was crisp and cold, and the darkened sky spoke that winter was not yet over. As we travelled through the mountains it soon became clear that we were in a dangerous winter storm. The icy roads and the blizzardy air kept both the bus as well as my car far apart. As the students slept the chaperones began to pray for our safe travels through the Rockies. Hours later, as we reached Jasper, we would soon learn that both highway routes to Edmonton were closed and had not been open for 24 hours. It would take a miracle for anything to be opened within the next day.

Tired and hungry, the first part of our faith journey as a band had begun. First the storm, now another physical barrier, a road closure. Knowing that help was a phone call away, I quickly phoned Edgar and asked for prayer and guidance. The thought of overnighting on a highway on a bus and vehicle while waiting for the road to be cleared didn’t excite me; nor did the thought of turning back and going into the storm to return home. After council from home, and food in our bellies we prayed for God to create a miracle for us and open the highway system once again.

So off we went waiting to see the next miracle and boy did God deliver. He parted the skies and for us and once again the roads were bare. Soon we passed the site of the closure and continued making our journey into the city.

When we arrived at the hotel, I noticed many new voice mails from King’s University. After a quick phone call, I soon learned that our tour was in jeopardy. All the time spent on creating workshops, concert venues as well as being adjudicated were falling apart as I learned that some of the clinicians were now in self isolation due to Covid-19.

Once again, I brought all the students and chaperones together. I spoke to them about how God was at work, and that we were going to pray for another miracle as God is never in short supply of hearing our prayers and giving us what we need for the day. Within minutes of praying in the front lobby, my phone rang again. This time with great news. Kings had called on the Edmonton orchestra, and there were clinicians that were willing to come to run each clinic.

The next day we arrived with excitement at the university, only to find that one of our students’ instruments was not brought onto the bus. Quickly our chaperone/ bus driver jumped into action. Within minutes he was back from a music store (a block away) with a tenor saxophone in his hand.

There were so many more miracles that happened on our tour; like wallets lost in the Edmonton Mall only to be returned with all the contents in them, phones lost and then found again, and friendships formed. The positive belief in everyday miracles was seen each day and all the students were watching these miracles happen in a tangible way. This is why “possibility thinking” in something bigger than you is so very important. It allows you to trust that God is going to do something BIG!

“Dear God, thank you for allowing us to dream big, and trust in you always!”